This tutorial describes C-Motion's interpretation (or "best guess") of the Oxford Foot Model. In it's current form, the segment's definitions (coordinate systems) are exactly those of the Oxford Foot Model. It is however not possible to obtain the exact same results as those generated using Vicon's Nexus software due to the use of different pose estimation methods in Visual3D.

Please contact C-Motion's support (support@c-motion.com) if you find any discrepancy or to suggest a method that replicates Nexus' results

This page is currently under construction. Make sure to read all instructions and comments before attempting to build the Oxford Foot Model as we cannot guaranty that the results generated from the model detailed on this page will be the same as those generated through the Oxford Foot Model Plug-in in Vicon's Nexus. An updated version of the model should be added in the next couple of weeks.

The Oxford Foot Model has gone through many iterations since its first publication, and there are many other multi-segment foot models in the literature.

Visual3D is a general tool capable of modeling all of the different foot models.

The Oxford Foot Model is a good choice for analyzing data from Children with Cerebral Palsy. If this is not your patient population, other options and other multi-segment foot models may be more suitable.

There are 2 different options when creating the Oxford Foot Model. The first one involves optimizing the thigh rotation offsets so that the dynamic range of knee varus/valgusis minimized. The thigh and shank's coordinate systems are them modified accordingly. The second option is to force the hindfoot and/or forefoot to be parallel to the floor.

The model you build in Visual3D will be dependent on the above options.

While we would recommend that users go through the tutorial to better understand how each segment is defined, the complete model template is available for download here. Please note that the same exact marker naming convention has to be used when labeling the markers in order for the model template to work. Also make sure to update all relevant subject metrics: Height, Mass, Left and Right Leg Length, Knee and Ankle Width.

While the Oxford Foot Model is a multi-segment foot model, it is often combined with a lower body model. When used within Nexus, the pelvis, thighs, shanks and single foot segments are copied from Vicon's Plug-in Gait lowerlimb model. The hindfoot and forefoot are added to create the multi-segment foot model. Because the Oxford Foot Model was intended to be independent of other models, and because of the way the Plug-in Gait model relies on the proximal segment to created the distal joint centre (used by the distal segment), a second shank definition had to be added to allow independent outputs.

Unzip this file in a location of your choice.

Visual3D will automatically open the Model Builder mode and your screen should look like the image below. 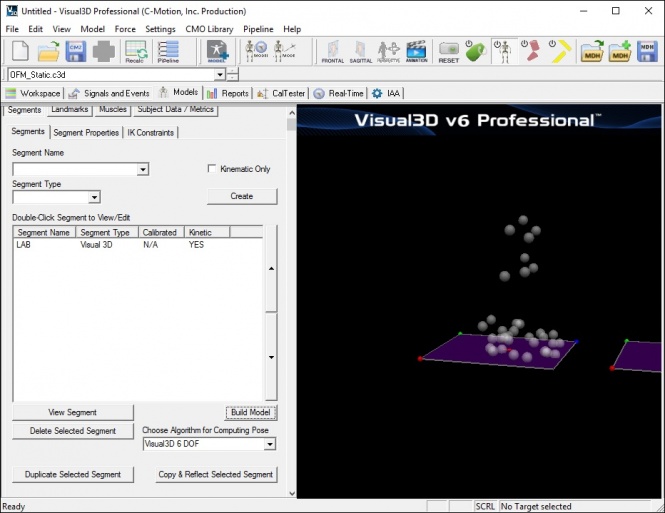 As previously mentioned, the following markers should exist in the dynamic trials for the Oxford Foot Model:

Markers identified with an * are also used by Vicon's Plug-in gait model.

The following is a list of markers only used in the static trail:

The targets only used in the static are anatomic only targets and used to define the orientation of the segment, but not used to track the segment. These targets may be left on during the dynamic trials, or removed.

As mentioned above, the Oxford Foot Model makes use of the Lowerlimb Plug-in Gait model. It is therefore useful to created this model before creating the multi-segment foot model. However, this multi-segment foot model can be combined with any lowerlimb model in Visual3D. It is thus recommended to use a more robust lowerlimb markerset/model if and when possible. Please note that doing so will generate slightly different results when compared to the standard Oxford Foot Model outputs.

Because the Oxford Foot Model was designed to be a stand-alone model, it is not necessary to combine this model with a lowerlimb model.

NOTE: The Subject Data/Metrics rely on landmarks that will be created later in this tutorial. Until the landmarks are created these metrics will have "No Data" listed as the value, once the landmarks have been created "No Data" will be replaced with a numerical value.

In addition to the Plug-in Gait shank segments, the Oxford Foot Model has its own shank segments. This multi-segment foot model was designed to be self-contained allowing its use without the need to have a thigh nor a pelvis segment. Contrary to the many conventional gait models where the distal segment relies on the proximal segment to create the joint centre, each of the Oxford Foot Model's segments are therefore completely independent on each other.

In reality, it is our understanding that the Oxford Foot Model's shank segments share the exact same coordinate system as that of the Plug-In gait. However, different markers are used for its tracking. This particular segment is only used when computing the shank's orientation relative to the lab.

Before defining the Shank segments, Landmarks have to be created.

Before defining the Hindfoot segments, Landmarks have to be created.

Before defining the Forefoot segments, Landmarks have to be created.

Because there is only one marker on the Hallux, additional markers are still required to track the segment in the motion trials.

While the Hallux is represented as a segment, only one marker is placed on the hallux. The Hallux segment therefore "shares" the medio-lateral axis of the Forefoot segment so that a coordinate system can be created for the Hallux.

For this tutorial, the correct orientation is X (red) mediolateral, Y (green) A/P, and Z (blue) up. This can be seen in the image below.


For the Hindfoot and Forefoot, the segment coordinate system should be modified so that the A/P Axis is set to +Z and the Distal to Proximal set to -Y:

For the Hallux, the segment coordinate system should be modified so that the A/P Axis is set to -Z and the Distal to Proximal set to +Y.

Overview of the Segment Coordinate Systems

NOTE: The bones will not appear because the model file is not specified. To specify the model file, go to Segment Properties and browse for the model file (right: rshank.v3g, left: lshank.v3g). The kinetic foot segment will be created later in this tutorial.

The joint angles computed above, will be plotted as a percent of the gait cycle between events. To do this gait events must be identified in the dynamic trials.

Before V3D can automatically create force assignments, it's necessary to create a kinetic foot segment. The foot segment may be defined using the typical Plugin Gait definition, or using the modified version described below.

Once the Right/Left Foot segments have been created, Visual3D should have created automatic force assignments. The blue force vector shown in the 3D viewer of the Signals and Events tab indicates that a force has been assigned to a segment and will be used for kinetic calculations (unassigned force vectors are shown in red). Force assignments may be modified by going to Force -> View/Edit Segment to Force Assignments.

Events should then be manually checked to ensure the correct events were identified. More information about Event Processing can be found here.

Once the joint angles have been computed using the Compute Model Based Data function, these can then be graphed in a report. For details on how to create a report, please consult the Creating a Report Tutorial 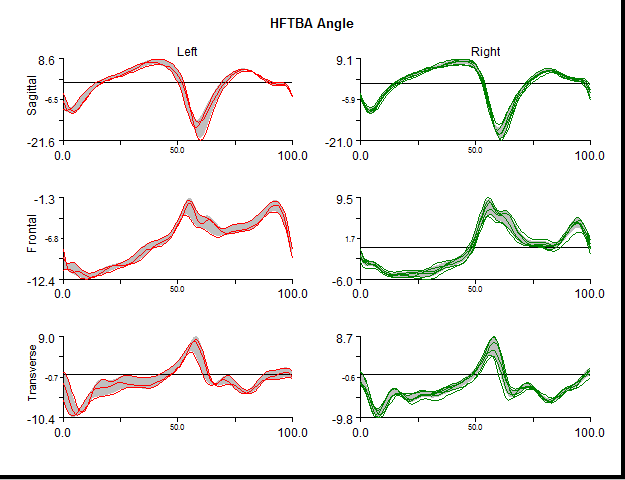 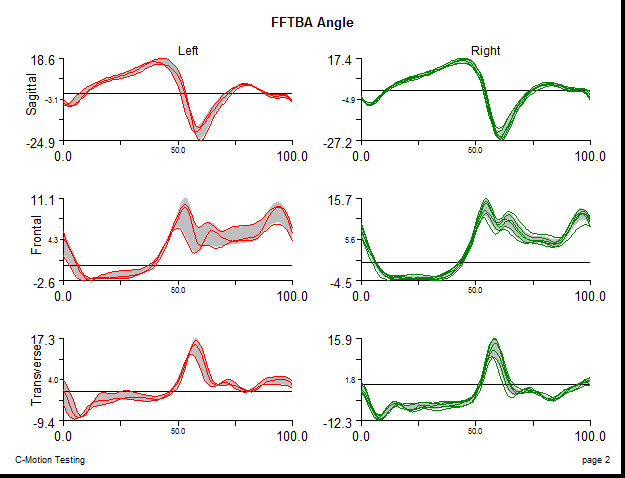 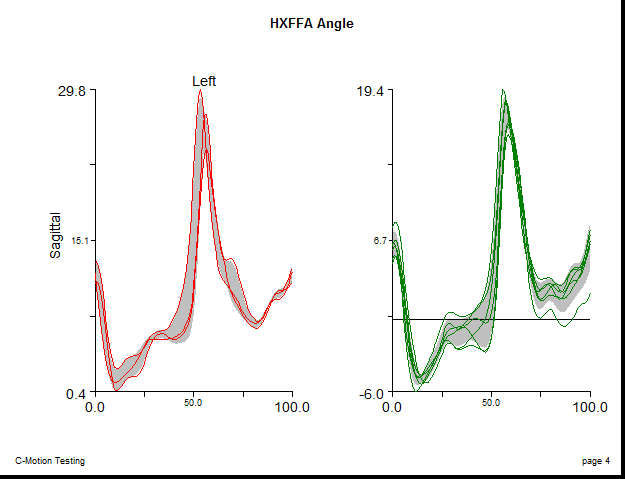 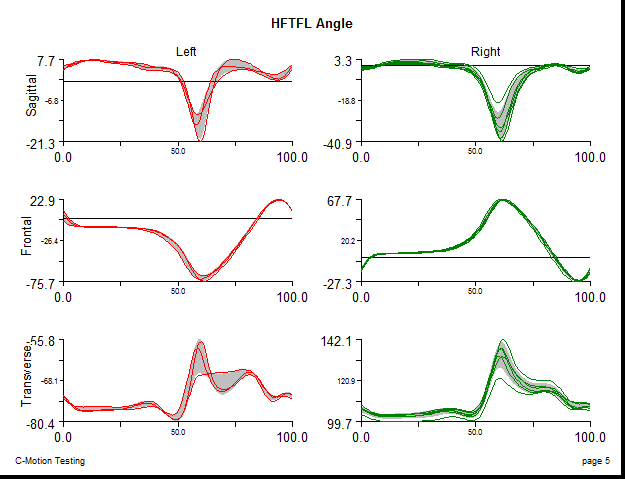