Before going through this tutorial or collecting instrumented treadmill data, you should review the Treadmill page which includes most of the important information you need to know to collect treadmill data in Visual3D.

This tutorial contains basic processing steps that apply to instrumented treadmills, including:

Under the Visual3D Force Menu is an option to set a threshold for force platform/structure data.

If the computed force is less than the minimum force, the force and freemoment are set to zero, the COP is set to DATA_NOT_FOUND. This threshold value is used to remove noise from the force signals. Often for instrumented treadmills this value must be set higher than for overground gait trials.

4. Hit Recalc to update the workspace No changes will be made to dependent signals until Recalc is hit.

NOTE: These steps can be done using the pipeline using the Lowpass_Filter and Recalc commands.

For instrumented treadmills, it is critical to set appropriate baselines for the analog signals that compensate for bias in the amplifiers.

For fixed platforms, it is straightforward to a range of frames for which the platform is unloaded. Force Platform Zero Parameters. Note that these are independent of the minimum force threshold and remove the bias on the analog signals when the force platforms are unloaded.

In Visual3D version 6 we have introduced a command FP_Auto_Baseline that automatically determines the appropriate baseline values to remove from each analog signal.

This command does three things:

The force assignments to segments should be computed automatically by Visual3D.

it is vitally important that Force Assignments are checked for validity (e.g. complete stance phase, only one foot in contact with a platform at a time, etc) because the event detection is based on Force Platform Assignments, not on the FORCE signals.

In the figure below the presence of the blue arrow displays the combined force vector from the two platforms. 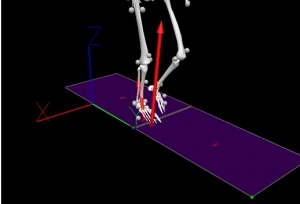 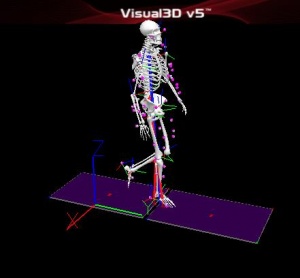 This script below is an example of locating the corners using markers, but it's actually recommended to do this using CalTester.