This tutorial describes how to create a pipeline to compute the Gait Profile Score and Movement Analysis Profile as detailed in the following paper: 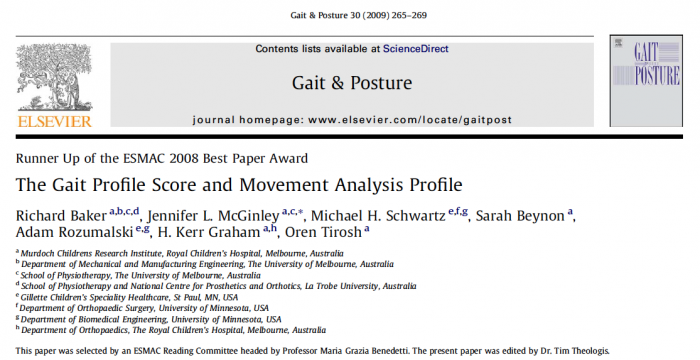 The gait profile score was originally published in the following paper:

Richard Baker further discusses the GPS and it's application on his blog, a link to this page can be found here.

Richard Baker also provides an Excel sheet which can be used to calculate the gait profile score. This sheet can be downloaded from Richard's blog. [3]

The Gait Profile Score (GPS) is an clinical index that can be used to describe overall gait pathology. The GPS is the mean value of a number of discreet values obtained from kinematic variables measured during gait. "[...] the RMS difference between the patient's data and the average from the reference dataset taken over all relevant kinematic variables, for the entire gait cycle.[...]" [1]

These kinematic variables are:

The GPS score can be computed for the left and/or the right side. It can also be computed as a overall index for both sides. *Since the pelvic movement is not specific to a any side, the authors recommend only including it when computing the GPS for the left side (as a convention). This means that for the left side, a total of 9 variables are used to compute the GPS, instead of only 6 for the right side. The overall GPS for both sides would therefore include all 9 variables.

Although the Gait Profile Score was explained in the 2009 paper [1], the equations were not explicitly written in the 2012 paper [2].

These equations also match the equations Richard Baker made available in an Excel sheet which may be used to calculate the GPS [3].

The Global Variable Scores (GVS) is defined as:

The Gait Profile Score (GPS) is defined as:

These equations can also be downloaded as a PDF here.

This tutorial describes step by step how to create a .vnd file and then create the GPS for a subject.

The tutorial also calculates the GVS at every 2% of the gait cycle, so the signal is normalized to 51 points [3].

To calculate the GPS using the specified kinematic variables [1], you must have a model with at least 7 segments in your model:

In addition to these segments, I also created Left/Right Virtual Feet segments and a virtual lab segment:

To calculate the kinematic variables [1], nine signals must be created. The signal name is user defined, but this tutorial uses the following names:

Since the Recalc pipeline is stored in the Report template (.rgt), a report template which stores these signal definitions was created. This report template can be downloaded here.
NOTE: It is recommend that the left and right sides have the same convention for +/-.

The GPS requires some reference data to compare against. For this tutorial, the subject's data is compared against a control database. Instructions to create a normal database can be found in the GPS Normal Database Tutorial. This tutorial describes how to easily create the normal data script and how to save the control data as a .vnd file.

The script used to create the normal data can be found here.

To complete this tutorial, sample control data can be downloaded from here. Please note this "control database" was created from subject - so you should NOT use this as actual data.

Calculate GPS for a subject

Make sure the subject's CMO has the same model template used for the control subjects and the same signals are defined (using the report template).

Gait events must also be created in the CMO file.

An example of a properly prepared CMO file can be downloaded here.

A. Set the active file to ALL_FILES

B. Run the NormalizeSubjectData.v3s script

NOTE: The same script was used to normalize the subject's data as for the control database. The only change was that the result folder was changed from GPS_CONTROL to GPS_SUBJECT in Notepad++ and then the new script was saved.

B. When prompted select the control database, an example database can be downloaded here

The script will use ALL signals in the GPS_SUBJECT folder for the calculations. The 2009 paper [1] used 15 kinematic variables, if you would like to do the same, only 15 signals should exist in your GPS_SUBJECT folder.

As long as your normalized signals are stored in the GPS_SUBJECT and GPS_CONTROL folders, and the signal names are consistent between both folders, you can use this script with signals that use a different naming convention or as many kinematic variables as you would like.