Kinematic calculations are based on segment coordinate systems with no reference to inertial properties.

Kinetic (Inverse Dynamic) calculations are based on assuming linked rigid segments, "connected" by joints with 1 to 6 degree of freedom joints

The Kinematics and Kinetics are computed as KINETIC_KINEMATIC data based on the model, the movement trial, and the assigned forces. These data are resolved into the Laboratory Coordinate system, and therefore often have little or no anatomical meaning.

The dialog for creating the variables can be accessed by selecting the following option under the Model Menu item or by the Pipeline Command Compute_Model_Based_Data. 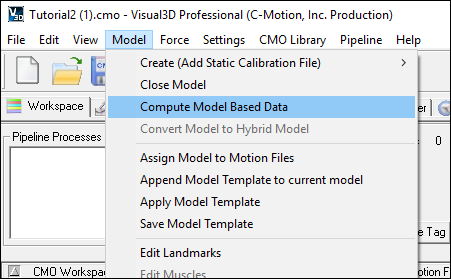 Under the settings menu there are three options:

If "Use Processed Analogs" and "Use Processed Targets" are checked (set to TRUE), Visual3D computes Kinetics and Kinematics using the data in the PROCESSED folder of TARGET, and ANALOG.

If "Use Processed Analogs" and "Use Processed Targets" are checked (set to TRUE), if the PROCESSED folder does not exist, the ORIGINAL folder is used. If you have filtered the FORCE/COFP/FREEMOMENT folders (which is not recommended - explained here) the PROCESSED will always be used.

If "Use Processed Forces" is checked (set to TRUE), Visual3D computes the frames for the force assignments using the FORCE PROCESSED folder. There is more information about this here.

At what point should signals be filtered

This is a difficult question because there isn't a single correct answer.

The answer depends on the pose estimation method, the marker placements, the movement being recorded.

An excellent discussion on this topic can be found here

Model based signals can be deleted from the data tree. Right mouse click on the signal (or folder) and select delete.

Visual3D computes model based items using MKS units; eg. based on meters, kilograms and seconds. An exception to this rule are joint angles, which are represented in degrees.

Visual3D contains a number of default segment names that are provided for the convenience of the user. These default segments contain geometry, the inertial properties, and the wire frame model. Users that create their own segment names need to add this information in the segment properties tab in Model Builder Mode

The calculation of Joint Moment, Joint Power, and Joint Force refer to the proximal end of the segment selected. For convenience we have mapped segment names to joint names automatically because we assumed that users would find it more intuitive.

Signals related to the estimation of the pose (position and orientation) of segments.

Creating a LINK_MODEL_BASED signal called the COP_PATH is a more general way to compute the center of pressure. The command checks all contacts between the specified segment and any force platform. The signal is then transformed (or resolved) into the specified local coordinate system). All occurences (eg. all force platforms) are included to determine if the segment has been assigned to the force signal.

Creating a LINK_MODEL_BASED signal called GRF_DATA is a more general way to reference an external Force. The user identifies the segment to which external forces have been assigned.

This allows the user to define the segment rather than the Force Platform, thus eliminating the need to make notes as to which segment is in contact with which platform.

The joint angle defined using a Cardan sequence (including the Joint Coordinate System.

The joint angle defined as a helical angle.

The joint angle represented as a 3x3 rotation matrix.

Computing the movement of the tracking markers relative to the segment coordinate system.

Path Length of a Muscle

The joint reaction force at the proximal end of a segment.

The net joint moment at the proximal end of a segment.

The joint power at the proximal end of a segment relative to a parent segment. This terms is parsed into 3 components.

The joint power at the proximal end of a segment relative to a parent segment.

Scalar Rotational Energy of a segment

Scalar Translational Energy of a segment

Potential Energy of a Segment

Total Energy of a segment
This is the sum of the Potential, Rotational and Translational Scalar Energy

Total Energy of the Model
This is the Sum of the Segment Energy over all segments.

Linear Momentum of a Segment.

Local Angular Momentum of a Segment

Some calculations are based on Model Based Items: