A more insidious problem is that there are joints, such as the shoulder, for which there is no single definition of the joint angle that is anatomically meaningful for the full range of motion of the joint. The consequence is that there is no standard sequence of rotations for describing the shoulder motion, despite the recommendation by the International Shoulder Group.

Joint angle lecture prepared by Tom Kepple when he was teaching at the University of Delaware. [Joint Angle Lecture]

A Joint Angle is the transformation between two coordinate system that is described by a rotation matrix.

Joint Angles, Joint Angular Velocity, and Joint Angular Acceleration are the only signals in Visual3D that don't use standard MKS units. Visual3D uses degrees, degrees/sec, and degrees/sec^2. These are traditional units in Gait Analysis and we have followed the trend.

However, all joint angles are treated the same in Visual3D, so the direction of positive angle is determined with respect to the segment coordinate system of the reference segment; using the Right Hand Rule.

The result of this decision is that flexion/extension has the same sign for left and right legs, but inward/outward rotation and abduction/adduction have opposite signs.

The user can change this by negating the necessary terms when the joint angle is defined in the Compute Model Based Items Dialog. Refer here for an example.

The default Cardan sequence for the calculation of joint angles is x-y-z, which is equivalent to:

The default sign conventions for describing the joint angles are as follows: 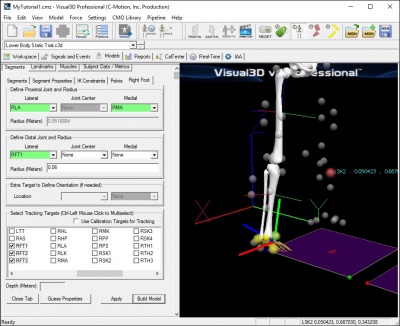 For this representation of the foot segment the z-axis is directed from the metatarsals to the ankle center.

The sign convention for the ankle angle defined using the kinetic foot relative to the shank segment is:

A common kinematic only foot is displayed here: 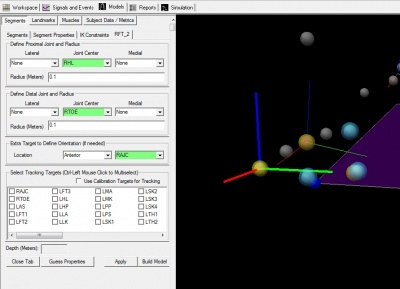 For this representation of the virtual foot segment the y-axis is directed from the heel to the toe.

The sign convention for the ankle angle defined using this kinematic foot relative to the shank segment is:

As a default, Visual3D calculates Joint Angles using a Cardan sequence of rotations. In the section Visual3D Default Joint Angle Conventions on this page, we detailed the Visual3D default segment coordinate system (z-up, y-anterior). Therefore the cardan sequence X-Y-Z is equivalent to the Joint Coordinate System.

If the user has modified the Segment Coordinate System from the Visual3D default, then more care must be taken in determining the sequence of rotations that is equivalent to the Joint Coordinate System. The sequence should be selected as flexion/extension - abduction/adduction - axial rotation.

Note: Visual3D will only allow a right hand coordinate system so the positive direction of rotation about an axis will need to be verified by inspecting the Segment Coordinate System visually in Visual3D's Model Builder mode.

Note: Grood/Suntay have a different sign convention, and they have an offset of pi/2 in the second rotation (ab-adduction). If you account for those differences, the XYZ Cardan sequence is equivalent to the Joint Coordinate System.

In early versions of Visual3D (version 2 and lower), we output the 3 components of the Cardan angle in terms of the first, second and third rotation. This was confusing to people because the edit report dialog refers to the first three components as XYZ. In Version 3.00.3 we changed the output so that the X component of the joint angle refers to the rotation about the X axis regardless of the sequence, similarly for Y and Z rotations.

In version 3.28 we introduced the Euler sequences (e.g. ZYZ), in which the first and third component are the same. In this case instead of referring to the components as XYZ, we revert to our original scheme, in which the output angle is defined with respect to the first axis, second axis, and third axes.

The helical angle calculation is output as vector rather than a unit vector and an angle of rotation.

Visual3d is simply multiplying the angle of the rotation by the three components of the unit vector.

Is possible to calculate a helical axis (vector and angle) in Visual 3D?

The answer yes by going the opposite way. To do this you would have to first compute the magnitude of the output of the “Compute Model BasedàHelical_Angle” and then divide each of the components of this vector by the magnitude.

To actually do this inside Visual3d you would:

Step 1) Use “Compute Model BasedàHelical_Angle” to get the helical angle as a vector.

Step 2) Use the Pipleline command “Signal Magnitude” (which is under Signal Math in the Pipeline) to get the magnitude of the “Compute Model BasedàHelical_Angle”. This would give you the angle you are looking for.

Joint angles aren't vectors, which means they can not be added or subtracted. A normalized joint angle is, therefore, not computed as 3 offsets from a reference posture.

As of version 5, the Normalization option for Joint_Angle was removed from the Compute_Model_Based_Data drop down list because it was sensitive to the subject's orientation relative to the lab, and was often being used incorrectly. We recommend using virtual segments as the reference. 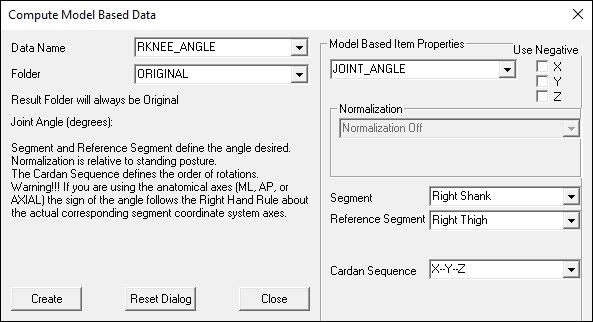 We don't recommend using the default normalization because there are situations in which the intermediate pose in the calculations will be in gimbal lock and the normalized angle will be undefined. In addition, it was sensitive to the subject's orientation relative to the lab, and was often being used incorrectly.

We recommend the use of virtual segments, which can be defined so that they explicitly cause the static trial to be a reference posture. For example, see the following topics for normalizing the ankle joint angle.

Normalizing the Pelvis Segment Angle. The Coda and Helen Hayes pelvis are tilted forward approximately 20 degrees from the horizontal. In describing the orientation of the pelvis or for describing the hip joint angle, it is often convenient to define a pelvis angle that has a coronal plane parallel to the floor (eg a vertical segment with zero tilt).

The consequence is that there is no standard sequence of rotations for describing the shoulder motion, despite the recommendation by the International Shoulder Group.

Computing the Range of Motion