Force Platforms are commonly used for biomechanical analyses. So common that there is a fairly laissez faire attitude towards force platform data. Many users don't realize the complexity of computing the ground reaction force vector in the laboratory coordinate system (where it is actually needed for Inverse Dynamics calculations), and, therefore don't take the time that is required to ensure that the data are correct.

Issues related to force platform coordinates are described below, but we feel it is necessary to emphasize one topic above all others.

The location of the ground reaction force relative to the ankle is the biggest source of error in Inverse Dynamics analysis of gait. Surprisingly few laboratories, however, undertake the challenge of verifying the location of the force platforms within the 3D MoCap volume (see our CalTester Section), or verifying the scaling and offset parameters on the ANALOG signals. This reluctance to perform a straightforward test that takes little time continues to surprise us at C-Motion.

This topic refers to the representation of external forces and how these forces are included in the inverse dynamics calculations.

If you are searching for the computation of Forces and Moments, see the section on Inverse Dynamics.

The traditional force recorded for inverse dynamics of gait analysis is derived from a Force Platform.

In recent years force sensors have been included in a variety of structures, such as Steps and Treadmills. Visual3D treats these forces as Force Structures, which are really structures attached to force platforms or to contiguous force platforms spaced in a grid.

In order to include a force in the Inverse Dynamics calculations it is necessary to assign the force to a segment. In many cases, force platforms or force structures, Visual3D attempts to assign the forces automatically. Custom forces must be assigned manually.

Using the Force Assignments the user can specify a Custom Force.

Here are some tips regarding filtering of force platform data:

Our recommendation is to filter the ANALOG signals, and not to process the FORCE, COFP, and FREEMOMENT signals

Under the settings menu there is an option

Use Processed Targets for Model/Segment/LinkModelBased items

If this is checked, Visual3D computes Kinetics and Kinematics using the data in the PROCESSED folder of TARGETS, FORCE, COFP, and FREEMOMENT.

If the PROCESSED folder does not exist, the ORIGINAL folder is used.

Under the settings menu there is an option

If this is checked, Visual3D computes FORCE, COFP, and FREEMOMENT from the PROCESSED ANALOG signals.

If the PROCESSED folder does not exist, the ORIGINAL folder is used.

Transforming from a sensor coordinate system to the LAB

The default value of 0.2m has proven to be an acceptable value, so users should refrain from modifying this value unless they have a very good reason.

Under the Visual3D Force Menu is an option to set a threshold for force platform/structure data. 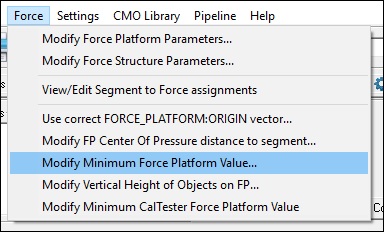 Applying a threshold value to the force signals. 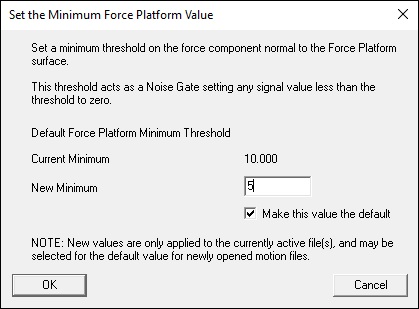 If the computed force is less than the minimum force, the force and freemoment are set to zero, the COP is set to DATA_NOT_FOUND

This threshold value is used to remove noise from the force signals. Often for instrumented treadmills this value must be set higher than for overground gait trials.