The Pipeline is a set of Visual3D commands that are processed in sequence.

Note: The pipeline is a COMMAND language, not a SCRIPTING language.

The Pipeline processor provides access to the core of Visual3D functionality through commands. Each function is represented by a command. The Pipeline is typically used to automate processing steps. 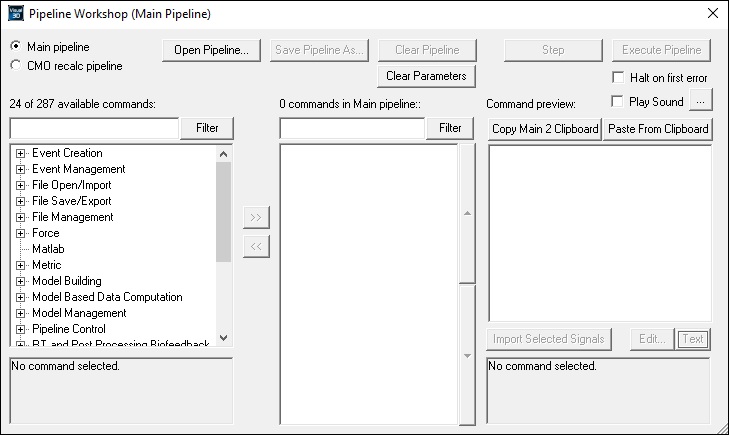 In special cases, C-Motion creates custom pipeline commands for users. These commands are usually fully functional but hidden from the interface. Users requiring these special commands will need to remember the syntax for the commands.

The RECALC button updates the Visual3D Workspace by performing the following:

This page is a collection of pipeline processing examples.

A pipeline can be used to define the processing steps for a given experimental data analysis protocol. This allows, for example, the director of the laboratory to control the processing that is done by a member of the laboratory. This may be essential for some experimental studies that require that all of the data analysis be performed consistently.

Visual3D plug ins integrate seamlessly into Visual3D and are accessed through the pipeline processor. The Pipeline can be saved to disk as an ASCII file (The Pipeline (.v3s) File) that can be edited with any common word processing program.

Pipeline commands usually process the "Active Files"; e.g. those files active in the Visual3D Workspace. If only one file is selected in the file selection box, the pipeline, when executed, will perform actions only on the data from that file. If ALL_FILES is selected, the script will perform actions on every file individually, as if the script had been run sequentially for each file.

Each Pipeline command consists of two parts - the command and its parameters.

Note: that each parameter begins with a slash and that the command is terminated with a semicolon.

Optional parameter are commented out - thus they start with an exclamation mark. When a command is first added to the pipeline the default values are displayed on the line, so that the user is aware of the default values.

Parameters may be edited in 3 ways:

Specifying Signals in a Command

Signals in Visual3D must be identified by 3 components

Signals can be represented in two different ways depending on the command.

These commands allow the user to import the checked signals in the data tree, so the syntax need not be remembered.

If only the signal type is specified. All signals of that type (and the default folder) are implicitly selected for use in the command.

For example: to apply a lowpass filter to all TARGETS. This is accomplished by specifying the SIGNAL_TYPE and SIGNAL_FOLDER but leaving SIGNAL_NAMES empty.

For legacy support (e.g. Visual3D version 1.0), if the SIGNAL_FOLDER is empty it defaults to ORIGINAL. In other words

For some commands, signals are represented using the a pipeline parameter syntax. This type of syntax is used in the evaluate_expression command.

For example, to identify the RFT1 signal we use the syntax TYPE::FOLDER::NAME

Entering Signal Names into a Command

Some commands act on signals (Target, Analog, etc). You can select a signal name for the command to work on by checking the signals in the data tree (Signal and Event processing mode) and pressing the Import Signals from Data Tree button. This will add the signal information (Type,Name,Folder) to the command.

Many of the commands that act on signals will not show the signals in the dialog. This can be a bit of an annoyance when there are only a few signals selected, but often commands contain so many signals that the list box in the dialog will become meaningless because of all the signals.

To make it easier to enter the signal types, names, and folders into a command, there is a button to add all "checked" signals from the data tree.

Launching Visual3D from a DOS Command Line (or an external program)

If not, you must specify the full path to Visual3D.

It is possible to have a pipeline executed immediately on launching Visual3D using the following syntax.

Note that the full path to the pipeline file is required unless the DOS PATH to this folder is specified.

An important feature of the pipeline is the ability to create and use Pipeline Parameters. A PIPELINE PARAMETER is a way to store a text string for use in Pipeline commands.

In one sense it is similar to specifying a global variable, such as body weight, that could be used in computations. It is actually much more flexible than that in the pipeline. The Visual3D pipeline commands permit multiple entries on a single line, and since the entire line can be represented as a string, a single PIPELINE PARAMETER can represent multiple entries.

There is a tutorial focused on the Visual3D Pipeline.

The .v3s file is an ASCII file that can be saved to disk and can be edited with any common word processing program such as Notepad++. When Visual3D loads the .v3s file it parses this ASCII file into the individual commands that are displayed in the pipeline dialog.

Many of the topics in the wiki pages contain pipelines or snippets of pipelines, with a note saying that the text can be copied and pasted into a file.

The Process for creating a pipeline from the above text.